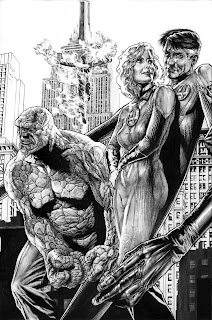 The Fantastic Four. I'm a pretty big fan of Jack Kirby's original interpretation of The Thing in the first issue of the book. He was less refined, more monstrous and sad, yet at the same time more likeable. There was something very blue collar to that Thing that visually you don't seem to get with more modern versions. I picture the Thing being the type of guy to throw on his hat and trench coat and go grab a beer after work. He doesn't need to be anatomically muscular to seem hard and tough. My Mr. Fantastic was modelled after Francesco Meo, my good friend and former roommate. Sue Storm was based on my wife's best friend Stefania.
Posted by L.J. Bermejo at 5:48 AM