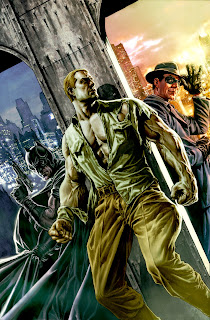 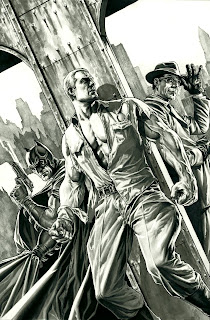 First Wave variant cover here. I'm pretty intrigued by what Brian told me about this series. It seems like an interesting approach to all the various characters they're using, and of course the fact that it features Doc Savage is just perfection.

I was first introduced to the character via the brilliant James Bama covers. To say they made an impression on me would be a HUGE understatement. There are few illustrators who have influenced me as much as Bama. I look at his work and his characters seem alive. I think the fact that he had a way of 'weathering' his figures made them feel more human to me. Typically, when trying to reinforce the fact that a character is iconic and powerful, an artist is pressured into idealizing almost every facet of said characters physicality. For example, wrinkles on clothes and costumes tend to read as 'messy' or 'imperfect' if done badly, therefore they are generally to be avoided if you wanna play by the rulebook. I remember a certain artistic 'superstar' explaining to me that too many details and particulars in skin and costuming made the character come off as goofy instead of cool. I couldn't disagree more. Of course this all comes down to personal taste, but I've always felt that those details somehow help me believe in the character more. Bama had a way of making Doc Savage look like he had really been through the shit, powerful and experienced all at the same time. His torn shirt looked like it had really been ripped apart by something, not just featuring carefully placed 'artistic' damage meant to make drawing the character easier or more formulaic. More importantly, it really looked like Bama's Savage had an internal life as well.. something going on underneath the surface. All those surface details actually contributed to his power and believability as opposed to limiting it.

Looking at the cover now, my pitiful attempt to do the character justice just reminds me how good Jim Bama is. For the coloring on this piece, I tried something different than on almost all other covers by doing the entire piece in Photoshop. Normally, I do most of my work in Painter, only really utilizing photoshop for effects and flatting. I wanted the piece to have a slight grain to it. Since the line is 'pulpy' I didn't want the image coming off as too slick.
Posted by L.J. Bermejo at 2:56 AM 6 comments: 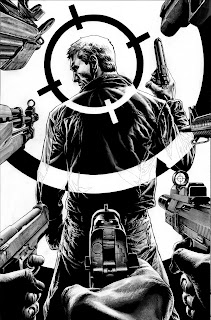 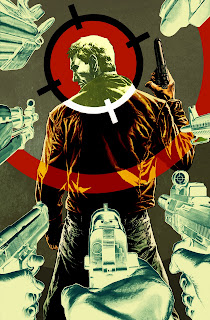 Looks like this cover was released to the general public, which means I FINALLY have something new to post. I really dig the character, and I also enjoyed the hell out of the covers Tim Bradstreet did for the Vertigo Human Target series. In fact, I like them so much I had a hard time not picturing them while trying to come up with layouts. Bradstreet is a tough act to follow. Honeslty, though, the biggest challenge of doing this cover was literally not knowing what the main character was going to look like. There was no visual information for me to go on other than some stuff I had seen online about the new HT TV series (and no one was even sure if that would be the model to follow). Since I started out in this business doing licenced product work, I know that sometimes these things just need to get done, regardless of how little information you have. Sometimes, it even makes the project more fun. This was the case on Human Target.

Personally, I love not being beholden to an exact model or visual. I enjoy an assignment more when I get some basic parameters and am allowed the space to do my thing. The only art direction was to go a bit 007 with it and that was all the info I needed. BIG props to my brothers over at Wildstorm for pushing through my idea to place the tag line over the figure as a graphic design element. We decided it would be best to do it digitally, though, and leave the art untouched just in case. It all seemed to work out in the end, which makes me a happy camper. Looking forward to seeing the show.
Posted by L.J. Bermejo at 4:25 AM 7 comments: