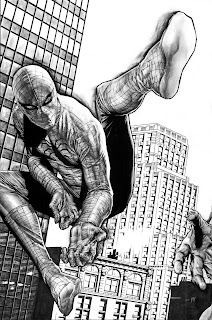 Some people still may not have seen this as it was never published in the states. Panini Comics commissioned me to do a huge, interconnecting cover for the Lucca convention a few years ago. Originally it was intended to be a series of alternate covers for 5 of their Marvel books. It was the first time I ever tackled the Marvel characters and I was thrilled to be able to do it in such a huge fashion. As it turned out, they printed the entire image as one big gatefold cover, sans the Spider-man section.

I'm going to post the whole poster over the course of the week and talk a bit about each one, but definitely wanted to start with the Spider-Man image. Out of all the characters I knew had to be featured, Spidey was the one I dreaded the most. All that webbing on the costume, the weird poses, etc.... How could I make it believable?!? You know you have problems when you're thinking how you can make a dude who got bit by a radioactive spider and gifted with super-powers 'believable'.


In the end, it wasn't my favorite piece but I definitely feel like I cracked how to make the character fun for me to draw. I think I've said this here before, but I'm really a firm believer that the costume should look hand made and NOT cool. I like the idea that the webbing looks sloppy and asymmetrical. I mean, essentially Peter Parker was a bit of a cosplayer. ,) I remember thinking to myself as a kid, 'How come you can't see where his mask attaches to the shirt?'. The solution: you can.

Cruisin' for a bruisin' 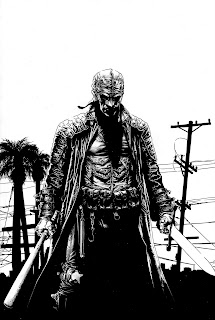