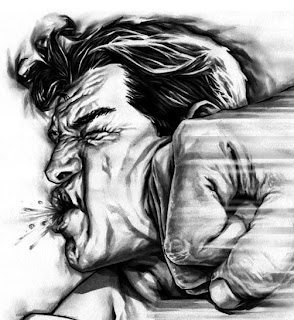 So this is pretty much how I feel around this time of year. Scrambling to get as much done as possible before the deliciously dangerous juggernaut we all like to call the San Diego Comic Con. The thing is, though, that every year I both dread the con and revel in it at the same time. Gotta say that after 16 years of attending the thing, it still fills me with the same sense of anticipation and excitement that it did when I was fifteen. There will be books to buy, some already on the list and some yet to be discovered. There will be drinks to be had, some disgustingly watered down in a plastic cup and others with that rich, bold finish that gives your night the runny edges of watercolors. There will be sketches to be done, some nice to look at although painfully overworked and others that I would like to lock in a vault somewhere as I sob to myself softly, starring at the vault key grasped tightly in my doritos stained fingers. There will be panels and signing to take part in, both involving a lovely little project called Wednesday comics. There will be Mexican food to be eaten... have I bored you already with this crap...?

If you find yourself wandering the overcrowded halls of this lovely monstrosity, cupping your nose to avoid the stench of body odor and CK1, stop by the Splashpage Comic Art booth and say hi. It seems I will be there most of the convention, when I don't have Wednesday Comics related events going on at the DC booth. In all seriousness, it's always great to meet people who share a love for this strange, fascinating medium we all are dedicated to. I will be doing comissions if you can get in early enough to get on the list but no promises. ;)

The blog will slow way down for the next week or two, but I promise to return with a slew of new posts. Hopefully there will be one or two decent comissions to show off, along with some new Superman pages in black and white and other surprises.
Posted by L.J. Bermejo at 9:33 AM 7 comments:

OK, so today is Wednesday Comics day. The first issue should be at your local shop right about now. The first Superman strip by the amazing Mr. John Arcudi and yours truly can also be found in today's copy of USA Today, and at their website via the url posted above. I know, I know... this sounds like a commercial, but realize that if you pick this up you're also getting a boat load of other stories by creators far better than myself. I personally can't think of a better representation of the diversity this medium has to offer right now than in this project. Unfortunately, I won't be able to get my hands on a copy until I make it back to the States in a couple of weeks for the big, bad San Diego con. Let me live vicariously through you guys!!! I'd love to hear what you think about this book, both good and bad. What were your favorite stories? Favorite creative teams? How do you like the format? I myself cannot wait to see the Deadman strip by Bullock!!!! The Joe Quinones Green Lantern also has my interest peaked, as everything I have seen from the guy has been spectacular.

Here's to my fellow Wednesday comics creators for making me a jealous man!!! Keep it up, boys and girls!!
Posted by L.J. Bermejo at 6:06 AM 6 comments:

So here are some sketches I did for the Filthy Rich cover. Definitely fun to just sit down with a brush and go for it. Although the clear choice was definitely the one we went with, the other options always seem to shed a bit of light on the creation process in general. This is also definitely the phase where I have the most fun in any cover gig. If possible, I try to take the sketches as far as possible without actually making a 'finished' piece. If I can answer as many questions as possible while working out the basic drawing and composition, there always seem to be less hurdles to jump on the final. The risk is always that you beat the life out of it. The trick is really knowing when to just let things go. A trick I CLEARLY have not learned.....
Posted by L.J. Bermejo at 4:39 AM 1 comment: 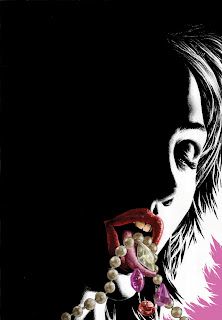 I really hope this blog can be a place not only to show off new work, but also to take some chances with illustration that may be difficult to do while working professionally in an industry that can be very unforgiving to artist attempting to experiment with style and technique. Every once in a long while, though, you find yourself in a position to try something a bit different and are lucky enough to have some support in this endeavor from the powers that be. Such is the case with the covers I've recently had the pleasure of doing for Vertigo's upcoming crime line. Vertigo is really the place to be. I LOVE working with the folks over there and I feel like this is a good opportunity to talk about what a fun challenge these illustrations have been.
When my long-time editor extraordinaire Will Dennis approached me about this project, he specifically asked me to try out something new. As if that wasn't already enough incentive, when he started telling me about the subject matter, it became an opportunity to sweet to pass up. Will wanted a series of covers that, 1). looked more like book covers than comic covers, and 2). had a strong graphic design feel to them. I consider myself to be fairly adept at illustrating 'moments' and freeze framing action, but really have always felt a bit average at composition. These covers would be a challenge to think outside my box and try to go in a direction where a lot of what I had learned doing comic book illustration would have to be ignored.
I did a series of sketches for each cover (I'll be posting them as well later) in color to try and nail down the look and feel that pleased everyone in Vertigo editorial. In the sketches, I was asked to play around with very rough logo placement, something normally not required of a comic cover artist, and that turned out to be quite a big key for me to get into the head space I needed to make these things a tad different. It determined where the point of interest needed to be placed and that in turn forced me to drop other unnecessary detail. The image above is the cover for Brian Azzarello and Victor Santos' Filthy Rich, one of the first books to see print in the line. Chances are, if you're reading this blog you're already familiar with Brian's work. The guy delivers marvelously every time and this is certainly no exception. I'm hoping people will really dig these books, as they really capture the grit and atmosphere of noir. It's exactly the type of risk taking I'd like to see more of in the American market.
Posted by L.J. Bermejo at 7:38 AM 6 comments: