The only thing I could think of when posting this was, 'It's such a fucking shame I have nothing newer to show with these characters'. Had to DIG just to find this, and it's a shitty old jpeg.

Wildstorm, as I knew it, has been no more for some time now. That said, when the news hit yesterday that it was official, it still greatly saddened me. I grew up there, literally. From 18 years of age until I was 25, that place was my home and the people that worked there, like a second family. So much of who I am and what I do today is wrapped up in those halls. Without getting into maudlin territory, here, I feel like this is the end of a dream I had as a fifteen year old boy. Wildstorm studios, then Homage studios, seemed like the absolute pinnacle of what was going on in comics at the moment back in 92/93, and I desperately wanted to be a part of it. Most of this was thanks to the work that the younger artists were doing there at the time. Aron Weisenfeld, Mike Lopez, and Whilce Portacio were people who were inspiring me greatly and I couldn't imagine what it would be like to work alongside these folks. It seemed like the kind of place that allowed a young artist to grow and experiment, while learning from the best of the best.

...well mostly. By the time I made it into the studio in July of 1997, all of those guys where gone. I was the last official intern (as part of the original internship program that spawned other amazing artists like Carlos, D'Anda, J.J. Kirby, Ale Garza, etc.) and things at the studio had already changed dramatically. With the heyday of Image Comics fading into the rear view mirror, the studio had already gone through a major re-structure and I was brought in to do consumer products artwork. Two years later(?) DC bought Wildstorm, and things changed again. I was lucky as hell to have stayed on, and all the sudden it was like the little fishes in the small pond got dumped into the ocean. Super fun, full of cool opportunities, but super stressful as well. The truth of it was, me growing up a DC kid, I REALLY looked forward to playing with some of those major DC characters. Although I LOVED the Wildstorm characters as well, the kid in me wanted badly to draw some Batman. The place evolved even more as the numbers in the offices dwindled and the studio got more sucked into the DC machine.

When I left in 2003, if felt like time. Wildstorm was, for all intents and purposes, my college experience and I was eager to get out on my own. Almost every year around con time, I make it back to La Jolla to hang out with friends so I've been able to see a bit how the studio has morphed even more. It's such a fascinating organism that place, always finding a way to survive and mutate into something that functions. The one thing that never changed, though is that feeling. When you walk in you feel an energy that I've never found in any other studio.

All in all, I got to play around a bit in the Wildstorm pool, and consider myself lucky to have done so. Looking at everything now with a bit of perspective, the thing that resonates with Wildstorm is that it, like it's characters, was VERY much a product of it's time. Although tastes change as well as people, I found myself digging up some of those old books and thinking, 'Damn, the possibilities..' It brought back tons of memories of people and dreams long gone. Sitting in the intern apartment with J.J, Carlos, and Armando looking at Mike Lopez photocopies, going to Jim's Spawn movie premier party and winding up with whip cream all over my clothes (a story for another time), barfing all over the hallway going into Jim's New York apartment, the best store signing ever in Orlando with Jim, Ale, Carlos, Sandra H, sitting with Carlos and Ale arguing 'cartoony or realistic'.... the list goes on and on.

Best Wildstorm memory isn't one event in particular. It was every time I sat down to draw, music blasting, looking out at the ocean and very questionable hotel guests, and loving the idea that I was drawing comics with some cool motherfuckers.
Posted by L.J. Bermejo at 1:53 AM 2 comments: 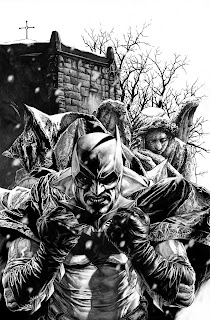 I can't believe I haven't posted this considering it's been out there circulating for a while. Originally done as a piece for the Splashpage sketchbook, this wound up being a very inspirational piece for the graphic novel I'm working on in terms of tone. I think I turned it in along with the script as part of the overall pitch. As such, it's a pretty close representation of what the book looks like. I look at this sucker as a very 'excited' piece... completely lacking in the editing phase but full of the pure joy of putting pencil to paper. As much as I enjoy being critical, I hope to never get so analytical with the work that I lose sight of what made drawing fun for me in the first place: the feeling of lead smearing grey on white and watching something emerge from nothing.

Getting back to the book, I've started to see some pretty great color pages trickle in by the uber-talented Barbara Ciardo. It's like being a kid on Christmas..... ahem, ahem.
Posted by L.J. Bermejo at 4:24 AM 11 comments: