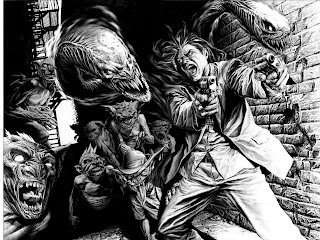 I know, I know.... ANOTHER old piece. Promise I'll start posting some new stuff as soon as it gets solicited. This Darkness wrap around cover was done a couple years back, and definitely presented a challenge for me. Whenever I approach a new character, I try to figure out a way for the dude to make sense to me. If I can find an angle, a way IN, the piece usually turns out more successfully. Sometimes, that angle never seems to manifest. In hindsight, I probably could have found a way to do the armored version of the character but I kept hitting a wall conceptually. See, The Darkness looks amazing when Marc Silvestri draws him. In all my preliminary sketches, the 'superhero' version just came off looking messy instead of badass. I couldn't figure out how to insert some of Marc's magic into what I do. In the end, I opted to play off the juxtaposition of having a guy in a suit next to all these weird little creatures.

Some of the old Image stuff has been on my mind lately. Part of me really wishes that there had been a way to transition a lot of that stuff into the modern marketplace. I still have a soft spot in my heart for some of those characters, and got a kick at digging up some of my old books and seeing what was hitting my switches as I began my career. Honestly, there are some GREAT concepts there (admittedly some truly AWFUL ones as well) and I think the Darkness is one of them. The fact that Jackie is a mobster is just such a fun twist to the concept. I also love the fact that the book had such a sick sense of humor. Garth Ennis is the MAN!
Posted by L.J. Bermejo at 2:36 PM 2 comments: