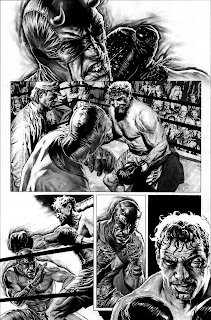 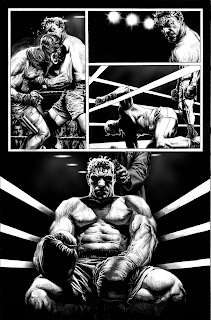 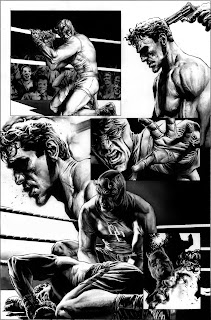 Finally found these pages while in a folder of old random work. Thought I had lost them. It had been a while since I'd seen these in black and white. I absolutely LOVE drawing Daredevil and can say with certainty I'm no where near done with this character. Would love to do some more DD interior work, since these three pages only scratched the surface of my interest. In fact, I'd LOVE to take Daredevil back to more of the feeling it had in it's first 20 issues or so. As much as everybody enjoys brooding, dark Matt Murdock, I'd like to take a left turn and take the character back to his more adventurous and cavalier roots. Matt Hollingsworth did a stellar job with these pages in color. I was thrilled to be working with the guy that colored Grendel: Devils and Deaths, probably one of my top three favorite books of all time. Anyone who hasn't read it should find it immediately.
Posted by L.J. Bermejo at 7:06 AM 11 comments: 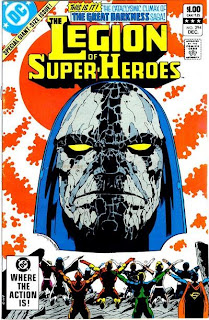 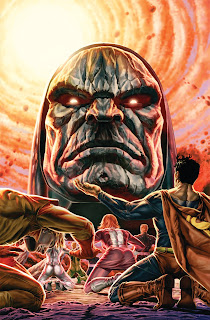 The assignment was to do a cover based directly on this Keith Giffen Legion image from the 1980's. Perks: No layouts required, the basic color scheme is already worked out, and the final goal is much clearer than it usually is. The thing I enjoy about doing homages to other pieces is the fact that, even with all this homework done beforehand, the final piece still requires you to find some solutions to make the image work for you. My ultimate goal became giving my cover a psychadelic feel, something that felt more in tune with what the Legion seemed like to me at that time. Put that tablet on your tongue and to relax....

I can't discuss this cover without talking about Jack Kirby. The Darkseid character is an amazing design and I LOVED the big orange sun in the background and all the Kirby-crackle. I did a number of passes on this in the drawing phase just to get Darkseid's face close to looking like Jack's stuff.... or at least as close as my capabilities would allow. In the end, hopefully my version is still recognizable as a homage to the Giffen cover, but different enough to be somewhat fresh. 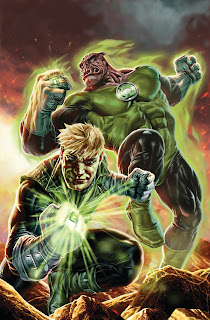 Green... and lots of it. My most feared color... the one I avoid like the plague. For this variant cover I was pretty much forced to deal with green and knock it around like a red-headed stepchild. See, normally, green is the bully, at least that's how I view the color. It tends to push me around in the piece, and force me into color schemes I don't really naturally gravitate towards. It tells you to add more yellow, a bit of purple, and makes throwing red in there a bitch and a half. Due to the fact that red and green are compliments, the combination of the two tends to produce and image where both colors fight each other for attention unless the piece is extremely simple. In this particular case, I started out with much more red in the sky and had to continually mix more purple into to get that green to jump forward. Anyway, enough boring color talk.

It's this simple: I had never done a Green Lantern piece before. I've done a couple of covers for DC lately where I branched out a bit in terms of the characters and tried some new things color-wise. To be honest, I never read Green Lantern as a kid, so a lot of wikepedia was involved here. Guy Gardner I was already familiar with, but from waaay back in the Justice League days. Funny, a LOT can change in continuity in twenty years ,) Look for this cover as the variant to Emerald Warriors #1.
Posted by L.J. Bermejo at 2:36 AM 3 comments: 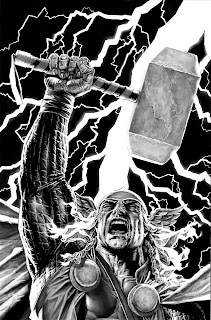 Just saw the image of Thor from the upcoming film and thought I would post this. I really enjoy what Olivier Coipel did with the book, especially his rendition of Thor's physicality. He just looked thick, powerful, and rugged... a nice change from many of the pretty boy renditions in the past. The long blonde hair makes it REALLY easy to drift off into romance novel cover territory, and Thor can be a particularly brutal character because of those big wings on his helmet. How in the hell do you make that combination look cool?!?!?! Solution: stick to Olivier's approach as closely as possible. It's really one of the first times I've purposely set out to emulate the look of another artist for a particular character instead of trying to find my own approach. Of course, my stylistic tendencies are still evident and the homage to Coipel is probably not all that noticeable, but every time I look at this piece I think of how it pales in comparison to Olivier's stunning work. The moral of the story is that you have to stick to your guns and do what works for you.
Posted by L.J. Bermejo at 6:03 AM 2 comments: