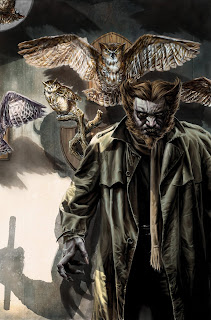 ... or is it the other way around? So more than a month now without a post. Couple reasons for that, but mainly the fact that I can't show anything I'm working on just yet. I wanted to post some of the Wednesday Comics sketches and pages in various stages of completion, but it looks like most of that stuff is going to show up in the hardcover collection. Got a couple things to put up this week, though, old and new.

I did this variant cover for Daredevil a year or so ago. Not sure if people have seen it so this seems like a good time and place to put it up. Had a good time doing this. The owls were an unexpected surprise. I went into it thinking they were going to be a pain in the ass but it was fun rendering all those feathers and playing around with them in the context of the overall composition. My only complaint here is the shadow of DD cast on the wall. I think I could've found a way to work it in better, or at least more clearly.
Posted by L.J. Bermejo at 1:18 AM 8 comments: