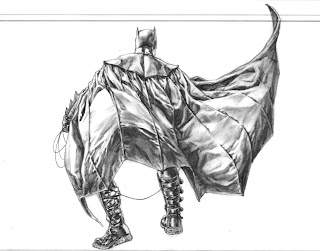 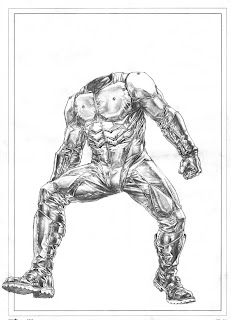 Since DC Direct has already solicited the statue they did based on my designs for Batman, I figured it would be cool to show a bit of work I did to help the sculptor get the details right. When the amazing folks at DC Direct got a hold of me for this they already had a pose in mind, based on the first Gotham Knights cover I did. I asked to make some minor modifications to costume in order to represent what I'm doing with the costume now, specifically with the graphic novel I'm currently working on. They were kind enough to oblige so I started a few detailed drawings to give them a clearer vision. The idea was that the drawings would also show just how the costume was assembled, starting with the body suit and moving on to the cape, cowl and accessories.
My ideas for the armor and overall texture of the costume are pretty specific, and I was really pleasantly surprised by just how accurate the ridiculoulsly talented sculptor, Jean St. Jean, was to my drawings, right down to the seams of the kevlar!!! Of course some of the little particulars had to be ignored due to the size of the final figure. For example, I usually portray Batman's cape as being made of a cracked leather or something similar to mimick the texture of a bat wing. At just over six inches, that type of detail just starts to look dirty. In the end, though, the COOLEST aspect of working on this was learning what works and doesn't work in three dimensions. As sculpturally as I like to think while drawing, nothing compares to seeing the thing in the flesh (or modeling clay as it may be). It definitely pointed me towards studying more sculpture in general. Come on....Bernini!!!! Does it get any better?
Posted by L.J. Bermejo at 9:12 AM 14 comments: 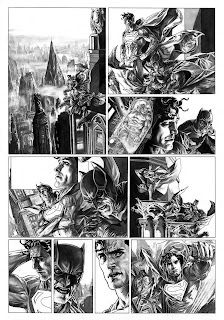 Now THIS is exciting news to me!!! Yeah, yeah, so I'm probably a bit biased in this case but I'd much rather have more of this kind of thing in our industry as opposed to bringing dead characters back to life about once every year or so and making a big deal out of it. It's like this, folks.... anything that broadens how people can see comics is a positive thing for the business. I'm pretty proud to be part of this (not to mention grateful!!!), and hope that we can at least get a few people to walk into a comic store out of curiosity. Definitely need to give a huge amount of credit to editor Mark Chiarello who is pulling the reins on this crazy bronco. It's his brainchild and I'm happy to see something he's responsible for getting national media coverage.
Enough of the soapbox! In honor of this, here is the black and white version of page 2. Again, DC unveiled this a while back on their blog in color, so hopefully a few of you (and I stress a few) will get a kick out of seeing the pencil work. Always fun to do Gotham City....
Posted by L.J. Bermejo at 8:17 AM 7 comments:

What's black and white with inkwash all over it...? 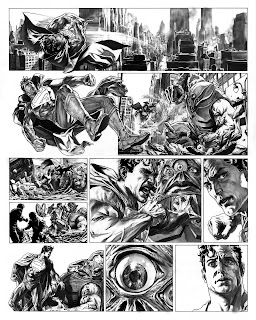 Starting in July, DC Comics will be releasing a weekly series called Wednesday Comics that will feature a unique newspaper strip-style format. I've been lucky enough to be included in the mix, doing the Superman strip with the amazing John Arcudi on writing duties and relative newcomer colorist extraordinaire Barbara Ciardo. Since the folks at DC have already released a couple preview pages in color I figured I'd share my original black and white artwork here.
This is probably the first project where I have really made a deliberate effort to soften things in the black and white phase. Coming off of Joker, where I tried hard to give the artwork a dirty, hard, grimy look, this proved to be more time consuming and difficult than I would have liked but it' definitely helped me to think more about turning my forms. Looking at a lot of Bernini and Ingres also seemed to put me in the right mindset. There's also something about the look of those old Hollywood serials that I connected with while trying to find the right approach for the story. I felt like the alien should look almost like a guy in a rubber suit or something...
The story really focuses on Superman's emotions and the acting definitely had to play a big part in the page. It's been a challenge to try and pull off some of the subtle facial expressions and body language throughout the course of this little project. Of course, the fact that the originals are HUGE helps give me the space to play around a bit more. More of these to come....
Posted by L.J. Bermejo at 3:43 AM 5 comments: 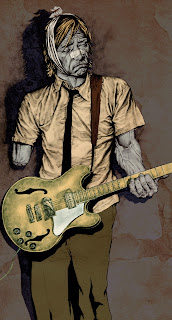 So here's the first post on this new adventure called blogging (or in my case just talking out of my ass). Since I feel like I'm the last person on Earth to start one of these things, let's just jump right into some art and skip most of the banter.
I did this piece a few years ago, and recently dug it out to throw on some quick colors. In most of my cover work, I've tried to achieve something of a painterly look, but find myself growing a bit tired of it. I'd still like to try and take a similar approach to my drawing but leave the colors a bit flatter and simpler. The goal is that the stuff will come off as a bit more graphic and less soft.
I'm also a big fan of off kilter colors. This is probably the result of spending so much time initially trying to keep pieces within some kind of 'realistic' color scheme. It's time for some painful exploration to push the work in another direction. Hopefully this blog will give me a good excuse to play around like this.
Posted by L.J. Bermejo at 8:23 AM 2 comments: