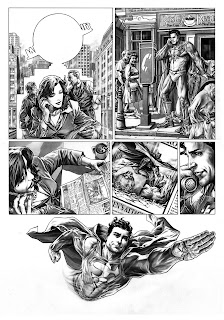 Last page of Wednesday Comics in pencil. Fun to finally get to draw Perry White and Jimmy. Working full steam on the new graphic novel. Still can't talk to much about it (trust me, I'd like to) but maybe I can sneak in a small peak or two in the coming months.
Posted by L.J. Bermejo at 12:11 AM 3 comments: 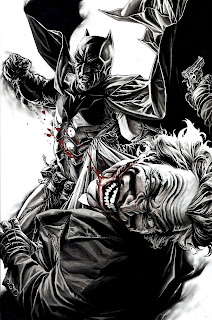 This piece is the perfect example of why I don't take commissions outside of conventions. I started this sucker about two years ago for painter Gabriele Dell'Otto. We traded Joker pieces, but he had a special request that I add Batman. In the time he waited for this, he and his wife had one child, conceived and gave birth to another, and probably lost their minds wondering why I hadn't finished this damn piece. In any case, I FINALLY got it done and a huge weight has been lifted from my shoulders. Ahhhhhh... the precious guilt. Anyone who is familiar with Gab's work should know that you can't just give an artist like that something ordinary. I've seen that bastard do some absolutely gorgeous color commissions at conventions over the years. Maybe I should add a flat red background... make a print of this or something.
Posted by L.J. Bermejo at 1:16 AM 12 comments: 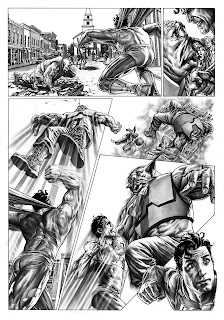 Sorry about the delay in new posts. Took a trip down to Tuscany with Carlos D'Anda and his lovely lady, Cindy. Anyone unfamiliar with Carlos' work should go out and buy the new Batman-Arkham Asylum game. Carlos is responsible for most of the character design work and the whole thing looks INCREDIBLE!!!!! At any rate, the guy is a monster and his work continues to impress, as does his ability to create interesting characters like The Terrible Tea-bagger. Citizens of small Tuscan towns beware!

Getting back to Wednesday Comics, we have officially reached the end of the experiment. The last issue hits the stands today as does the last installment of the Superman story on USAToday.com. Gotta say I will miss seeing a new issue every week. Kudos once again go out to Mark Chiarello for setting this whole thing up!!! Hope they do it again next year with totally new creative teams. Now that the precedent has been set, it's time for some new blood to come in and really explore the format. For now, here is the pencils for page 11. Since I've had some questions about what materials I use and my technique, this might be a good time to break it down. It's fairly simple: I draw with a drafting pencil, generally using an F lead or occassionally a B lead. Most of the line work is done with Microns and the washes are done using watered down Windsor & Newton inks. It should be noted that I do most of my value work in the pencil stage, coming back in with washes mainly to pump up the contrast a bit. I draw everything I do on the back of the standard DC illustration boards. I just like the surface better. 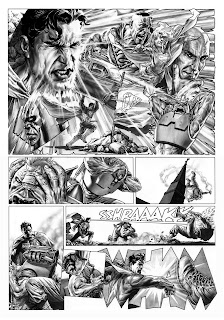 OK, now let's talk about this nipple issue. Yes, I gave Supergirl nipples. Oddly enough, sometimes nipples show through when someone is wearing a skin tight costume. Does it sexualize her? I guess it all depends on the individuals reaction to it and their own personal issues. I read somewhere that it ruined the effect of this page for someone. I really must say the idea that something as simple and beautiful as the shape of a woman's nipple somehow damaged the effect of the storytelling saddens me as an artist and a human being. Haven't we gotten past this, or is it just the armpit of the American gene pool that find something like that offensive?!?! Are they gasping and pointing every time they see a woman in a tight shirt?!? Oddly enough, those same kind of comments weren't made when I draw Superman more 'realistically' in the underwear area.

Even more amazing to me is that the comments come from people who love and religiouly follow a medium that glamorizes and exxagerates the human body every chance it gets. I have immense respect for the human figure, both male and female, and as such, my characters have nipples, crotches, and hopefully everything in between.

All that said, what a blast to draw all those little characters and moments in Superman's life. In hindsight, I wish I had more room to go off here. How cool would it have been to have an entire page of that stuff?
Posted by L.J. Bermejo at 6:25 AM 10 comments: 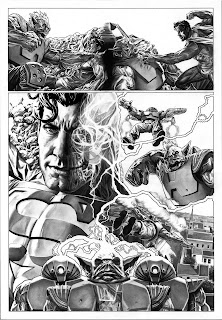 Haven't been keeping up with posting these pages in black and white. That said, hopefully there will be some cool stuff to show off (new) in a week or so. This particular page was pretty fun given that the layout could get a bit more experimental. I also REALLY wanted to get a big portrait of Superman on one of these pages, so number 9 provided me with the occasion. I love looking at all the other guys work in Wednesday Comics to see how people are using the space.
Posted by L.J. Bermejo at 8:40 AM 2 comments: 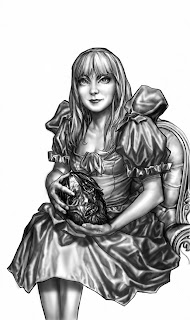 Just some fun sketching around in photoshop. Molly likes to play with dead things. About half a days work here. I'll try to finish this up in between things, but am at a loss as to where to go with it. Falling back in love with early nineties alternative. Jawbox, Drop Nineteens, Soundgarden, and Jawbreaker on the stereo. What am I, fifteen again?!?!?!?!
Posted by L.J. Bermejo at 1:07 AM 4 comments: 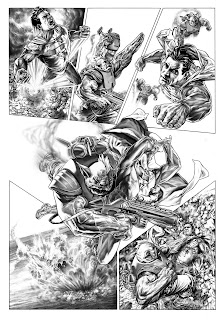 Another page of Superman and another issue of Wednesday Comics. Here is last weeks page in black and white. This page is a perfect example of how a colorist can actually be a storyteller as well. I wanted Barbara to really go all out here, adding as some clouds, sky, and smoke trails to help make readers feel like they were up there with Superman. Not only did it need to look cool visually, but I also felt like it was necessary for storytelling purposes. She really exceeded my expectations here and turned in one of my favorite pages of the series.

One of the things I wanted to do with this story was take advantage of the larger page sizes to switch up rhythm from time to time. Since John's script called for the first few pages of the story to be a bit more internal and low key, I wanted the page layouts to reflect this. Once the story kicks into high gear, the layouts change and start veering away from the more traditional strip format. The past three pages have seen things get a bit more free form, and this page in particular seemed to be a good opportunity to start giving you some bigger, more dynamic imagery. I've read some comments about how quickly the page reads, which I took as a compliment. Action shouldn't read slow, right? When you're writing a song, not every bar has the same notes at the same tempo.....

Check out this weeks page over at USA Today to see another example of how the layouts continue to get more experimental as things heat up.
Posted by L.J. Bermejo at 7:14 AM 2 comments: